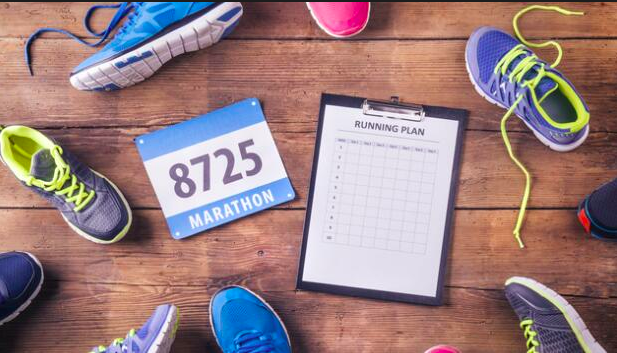 Successful runners have three things in common: they work their butts off, they’re stubborn as hell, and they plan their training to a T.

The reality is, a runner who doesn’t plan will likely get injured and never reach their true potential, because without a plan it’s just too difficult to know whether you’re training too much, or training too little. Getting that balance just right, and consistently training at your peak, requires some smart planning.

In its most basic form, a training plan is simply your schedule of weekly runs, strength sessions and recovery routines. Its purpose is to give you a birds-eye view of how you’re training.

The planning doesn’t need to be difficult or complex, but you should stick to some guidelines.

A few months ago I was on a running high—going faster, further, and feeling great—and all I wanted to do was run, every freakin’ day. So that’s what I did. For several days in a row, I laced up and headed out energized for another triumphant training session. By day four, I felt taxed, but I kept going, not wanting to break the rhythm. By day six, my legs were heavy, my shins ached, my feet throbbed, and I was forced to rest every kilometer or so. My slowest run in months left me feeling lethargic and just plain crappy.

Afterwards, I didn’t want to train for days! I was worn out and worried that if I went out for another run, I’d surely end up injured. My body was sending me a message, loud and clear.

I rested for five days, then slowly got back into the groove. But that recuperation was an unplanned setback that broke up my entire routine, and my mistake could have been amplified with a more serious injury. If only I had been smarter to begin with, I would have avoided the forced long break, trained more consistently, and ran better with less tissue damage. Lesson learned!

Yes, I understand that as a runner you want to run as much as possible. But overtraining is the quickest sure-fire way to get injured and hinder your long-term success. So while you don’t want to make excuses to avoid training, also be cognizant of what your body is telling you and don’t be afraid to be conservative. I promise that even if you only run once or twice a week, you will still make gains. In the long term you will be running further and faster than the person who did too much too soon and got injured.

Rule 2: Rest days are not optional

I may be repeating the reasons for the first rule, but rest is essential and the secret to all successful training. Rest is when you get stronger. Your body uses rest time to repair damage, build muscle, and strengthen tissues in preparation for your next outing. Without rest, each run depletes you further, makes you weaker and pushes you closer to injury.

One to two days between runs is perfect for most. Some seasoned runners can get away with training more frequently, but this is the exception to the rule. If you’re a newbie, or even a veteran aiming for a new distance, be patient. You will become great with time!

Rule 3: Strength train as often as you run

Successful runners know it isn’t just about clocking those miles. To excel, you need to be strong, powerful and balanced.

Your primary focus should be on developing endurance and stability in your muscles, rather than building bulk mass or brute power. Developing a strong core, powerful glutes, and controlled single-leg balance will result in better running economy and a stronger race finish.

No matter your goals, each week should include a mix of speeds and distances. Schedule one tempo run, one speed run, and one long run. Let’s go through what each looks like.

Tempo run: This is slightly faster than your typical long-distance speed. Start these runs at a comfortable pace, then work up to running faster for the middle section, before cooling down with a slower pace. The faster portion should be the majority of the distance and shouldn’t be a sprint, but more of an uptick in speed. Your heart rate is up to about 80% max, and you’ll be winded enough to only speak in short sentences. These runs should be no longer than 30 minutes.

Speed run: As the name suggests, the goal here is to get as fast as possible. Do short bursts of acceleration, with intervals of rest (walking or slow jogging). Rest intervals could be at 400 meters, or as mile repeats. Whatever your level, focus on going fast, not far.

Make sure to spread these variations out throughout the week and give yourself at least one day between each running workout.

Rule 5: Keep it fresh with lots of variety

The easiest way to get injured as a runner is to do the same routine repeatedly. That’s why healthy running is all about finding balance and variety. You can easily change things up by planning different runs through the week and mixing up your strengthening exercises.

Frequent changes prevent overuse injuries and help you develop a body that is resilient and versatile. The idea is to not only be able to run the next race you’re training for, but also be able to run for a lifetime.

Other than a mix of different runs and strength sessions, there are plenty of other ways to add variety to your week. Some things to consider are:

—Try new routes. Not only will a change of scenery make your run more interesting, but it will also bring new challenges, elevations, and obstacles.

—Run on different surfaces once a week. If possible, try a mix of a treadmill, roads, grass, and trails.

Check Out The Video