What Is Runner’s Knee? 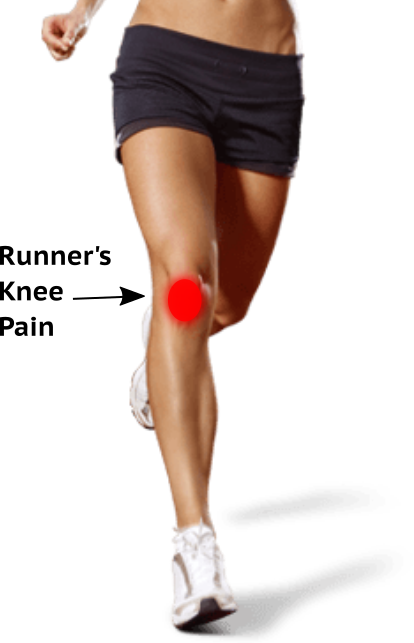 Runner’s Knee, or patellofemoral pain syndrome, is a common overuse injury causing pain at the front of the knee, around or behind the kneecap.

It is most common in runners but can also affect other active people who participate in sports such as cycling and hiking. Most people recover completely from Runner’s Knee after a few months of rehab, although it is an injury that can become chronic if not treated correctly.

The most common symptom of Runner’s Knee is an aching pain around or behind the knee cap.

Most runners notice this pain come on during a run then last into the night and/or the next day. In more severe cases, the pain can become consistently present throughout the day, even flaring up during mundane daily activities like walking and climbing stairs.

There should be no pain during rest when lying down, sitting or standing in one spot.

People also often describe creaking & cracking noises (crepitus) and knee stiffness. Minor swelling may be present in some cases, however, Runner’s Knee does not cause severe swelling or bruising.

Runner’s Knee is an overuse injury caused by excessive & repetitive strain. Or simply put, doing too much, too soon, too frequently.

It is important to note that unlike many other sporting injuries, there is no actual tissue damage associated with Runner’s Knee pain. No bones are broken, no tendons are torn and no cartilage is damaged. The pain you feel is instead coming from inflamed tissues that surround the knee cap, particularly fat, bursa and synovial membrane.

These tissues work to lubricate the knee joint and provide extra cushioning between the bones. When there is an unusually high level of stress on the knees, these tissues get irritated & inflamed. This inflammation acts as a warning of potentially more serious tissue damage if the stress continues.

Every tissue in the body (bone, cartilage, fat, tendon, muscle, etc.) has a certain level of stress that it’s used to handle. This stress tolerance develops over many years and is determined by your lifestyle – what your body needs to do on a regular basis. Professional athletes, for example, develop a much higher tolerance for repetitive physical stress than sedentary office workers because they condition their body to handle intense amounts of exercise.

Overuse injuries, like Runner’s Knee, occur when repetitively high levels of stress are placed on a joint that go beyond what those tissues have adapted to handle.

For most people, getting Runner’s Knee is simply a sign that they need to slow down their training and better prepare their body to handle the stress of long-distance running.

Runner’s Knee is an overuse injury caused by doing too much, too soon. It’s a sign that your body wasn’t ready for that much running.

One of the most common myths about Runner’s Knee is that it happens because of kneecap ‘maltracking’. This idea that the kneecap moves ‘out of alignment’ and rubs against the tibia bone of the shin.

For a long time, doctors and physiotherapists believed this bone-on-bone rubbing caused the pain and wore down cartilage. However, we now have a lot of evidence to show this isn’t the case, bad knee alignment does not cause Runner’s Knee.

People have kneecaps of many different shapes and sizes, and it is common for kneecaps to move at slightly different angles as the knee bends. We now see that these anatomical variations are not a fault in some people but rather, normal human structure.

Research studies have proven that people who have ‘less than ideal’ alignment (who we would have expected would get Runner’s Knee) are no more likely to develop the injury than people who have textbook ‘perfect’ knees. 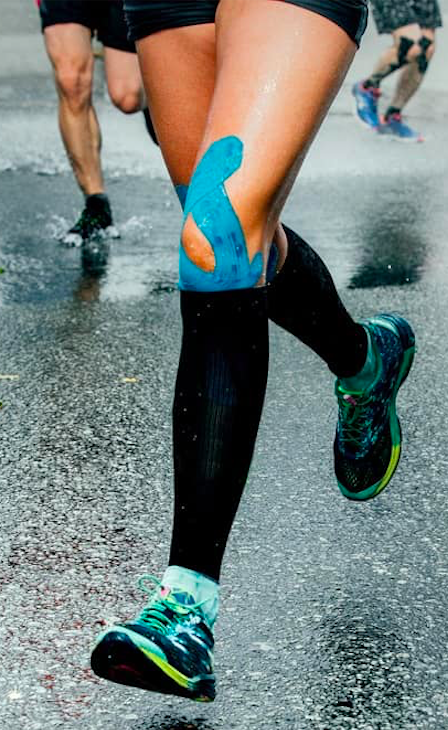 The most effective treatment for Runner’s Knee is exercise rehabilitation. Strengthening the hip and knee muscles is proven to significantly reduce pain and improve function, allowing runners to return to normal physical activity within 6-12 weeks of treatment.

A study released in 2016 also showed that 73% of runners who completed a course of exercise rehabilitation remained pain-free three years after their initial injury.

An exercise rehabilitation program should focus on hip and knee exercises, as well as core strength and balance.

Exercises should be performed 2-3 x per week with a gradual progression in the difficulty.

An online 8-week Rehab plan for Runner’s Knee. Step-by-step Physiotherapy program you can do at home.

There is some good research to suggest that foot orthotics can be effective in reducing the pain of Runner’s Knee.

These modalities work by offloading some of the stress on the knee. They’re a good option for runners who are racing (or training) with mild Runner’s Knee. However, tapes and braces do not access the cause of the injury and are therefore not long term solutions.

Bolga et al. 2016, Pain, Function and Strength Outcomes for Males and Females with Patellofemoral Pain who Participate in Either a Hip/Core or Knee Based Rehabilitation Program, International Journal of Sports Physical Therapy, 11,p. 926-935

An online 8-week Rehab plan for Runner’s Knee. Step-by-step Physiotherapy program you can do at home.